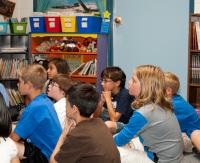 usic teacher, Katharyn Bauder.  The school was remodeled in 1992 and 2006.  In 2010, Moore Elementary School closed and merged with Bauder increasing its enrollment.

The building itself is one of the largest elementary schools in the district.  At its height, Bauder once had 700 students roaming the hallways.  With the recent merger, Bauder currently has a more manageable enrollment of just over 500 students.

1992/1993 - New additions and gymnasium installed.  (Third and fourth grade students are housed at Washington Elementary during this time)

2013 - New ventilation system added to aid with cooling and heating

PSD does not unlawfully discriminate on the basis of race, color, creed, religion, national origin, ancestry, sex, sexual orientation, gender identity, gender expression, marital status, veteran status, age or disability in access or admission to, or treatment or employment in, its programs or activities. A lack of English speaking skills will not be a barrier to admission or participation.
Nondiscrimination/Equal Opportunity District Policy AC >> Title IX compliance Officers >>